The average temperature is between 22°C to 25°C in the summer months.  In winter the average tempreture  falls from -1°C to -8°C. The beginning months of summer are the sunniest of the year and rainfall is much lower. August and September are the wettest months in the year and at times, thunderstorms occur. I’d like to visit Canada in the summer months, when the weather is good.

What is The Time Difference ?

The time difference is 5 hrs. That means when it is 11pm in the U.K. It is 4pm in Canada. I will have to remember this when I go to Canada, so that when I phone home it’s not to late and I don’t wake everyone up in the middle of the night.

The Canadian dollar is used instead of pounds.

I would take £150  that would be $264 Canadian dollars, for my spending money , to buy lots of souvenirs for my friends and family.

What is the national dish of Canada ?

The main dish that Canadians really like is Maple syrup with Pancakes. Also Poutine which is made out of French fries, gravy and cheese curds. When I go to Canada, I think I’ll miss this one out to eat, but I’ll try the maple syrup and pancakes.

Famous Landmarks Of Canada I would like to visit. The Big Nickel is a 30-foot re-creation of a 1951 Canadian nickel, and it comes courtesy of businessman Ted Szilva and artist Bruno Cavallo. Before the park opened in 1888, the 800-year-old tree was already burned and hollow carrying a circumference of over 40 feet. The tree  is 130 feet. As the tree is no longer living it has been shrinking, and storms have put it in danger of tipping over, they use steel cables and barricades to keep it upright.

Formed during continental separation, the Bay of Fundy, located between New Brunswick and Nova Scotia, boasts tides that are among the highest in existence for vertical tide range.

At over 1,800 feet tall, the CN Tower was the tallest free-standing building for over 30 years. 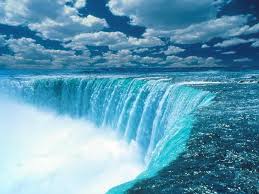 Canada’s Horseshoe Falls is the most defining element of Niagara’s collective beauty and impact.

The first  person to go over the Falls in a barrel and survive was a  63 year old female schoolteacher.

The falls make a tremendous sound as the water goes over and lands at the bottom. 20%of the worlds freshwater lies in the Great Lakes and most of it flows over Niagara Falls.

3 thoughts on “The Place I Wanted To Go”